We took a trip this weekend, we flew to Atlanta.  That's our first trip since my diagnosis and it felt wonderful.  Because I have a Platinum credit card from American Express I get a free ticket once a year and that's what we used.  I paid for my ticket and Mac got his free.  And what was even nicer, they upgraded us to Economy Comfort on the way up and to First Class on the was back.
Stayed at the Renaissance Hotel right at the airport with a view of the planes landing and taking off.  On Friday night we went to a baseball game at Sun Trust Park to see the Braves play the Colorado Rockies, we lost.  But it was a beautiful park, we had great seats and we enjoyed it.
Saturday we went to the Georgia Aquarium which we didn't enjoy---too crowded, too many baby buggies and too many displays that weren't live fish.
For lunch on Saturday I asked Siri to find us a restaurant near the aquarium and she gave us a list and I chose Benihana's.  We haven't been to one of those is years.  Love the cooking done at your table.  Mac had Calamari and Scallops and I had Shrimp.  Both meals came with mushroom soup, fried rice and fried veggies.  It was so good.  I ate the most food that I've eaten in months.  It was fun to watch what the other folks at the table had too.
We took a car service to get around town, neither of us can do too much walking.  We had the same driver the whole time, we would call and he'd come and get us.  Really nice gentleman from Ghana.
Atlanta has always been the largest city in Georgia, but it's gotten huge and the traffic was awful.  Glad we live down here on the coast.

It's Saturday morning and I should be cleaning up the kitchen, but I thought I'd do a quick post instead.  Mac took some pictures of my new plants, he has one more to pot---a Texas Lilac---we were looking for a Buddleia, but they didn't have any.  He also took so photos of our neighborhood alligator, he is growing quickly. 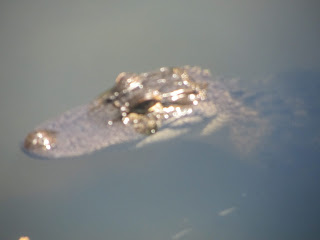 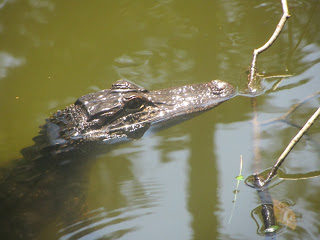 My hair's falling out.  Just when it was coming in thick and growing every day.  So I want it to fall out quickly so it can start to grow again.  It was looking cute, now I have bald sidewalls.
Had a great week.  Managed to exercise twice, started a new painting and found more things to paint. It's commissary shopping today with a stop at Lowes and Hobby Lobby.  My Gardenia looks so pretty I want another one.  Need to get off my duff and take some photos.
Rained every day this week except for yesterday.  All that rain has kept our pool cool, usually by this time of year it's almost too warm to swim in.
It seems so strange to see all the photos from England showing yellow grass.  Here it's so green and the weeds are having a field day.  About the only thing blooming though are the Zinnias and the Ginger Lilies.
More sad news from Mac's cousin's family.  In addition to the cousin's house burning down, their sister who lived in Colorado passed away.  So sad.  She was my age, but I don't know the details yet, but we will send flowers.
Mac had another cousin call this week, just felt the urge to talk to everyone, know the feeling.  Then last night we talked with Mac's brother and his wife.  They're just back from Montana where they went to a cowboy wedding and then to Glacier National Park.  They live in the San Francisco Bay Area and said their flight home was 2 hours and then their drive home (which isn't that far) was also 2 hours---too much traffic.  That's one of the reasons the other cousin Mac talked to said they're retiring next year and leaving California.  It's definitely one of the reasons we left.  Just too many people.
Skyped with our daughter this morning--what a great invention Skype is.  Our daughter hates talking on the phone, but loves Skype, it's so much more personal.
Well that's all from here, hope you're having a great Sunday.
at August 05, 2018 18 comments: