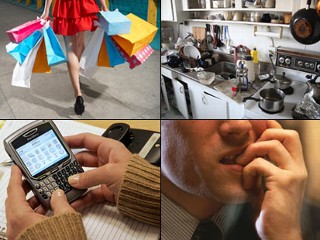 Addictions come in all shapes and sizes and can  be a real problem to get rid of.  My younger sister is trying to beat her smoking addiction.  She has smoked since she was a teenager, but it is wrecking her health.  She has emphysema and was hospitalized with pneumonia and nearly died last year.  After that she managed to quit for 3 months.  Then she was hospitalized again just before Christmas with breathing problems  and she knew she had to try again.
I give her all the encouragement I can, I'm a former smoker, but I kicked the habit nearly 30 years ago.  It wasn't that hard for me, I was lucky.  Mac, a light smoker, quit with me and we learned how to do other things beside sit and smoke.
My sister says that even though the smoking is wrecking her health thinking about that hasn't helped her quit.  What's working for her right now is thinking about the money she's saving by not smoking.  It's an expensive habit.
I hope she can quit this time and that those around her who smoke, don't smoke near her.
As for me, I have an addiction that I've tried all my life to kick and still haven't managed. Not shopping, playing games, gambling or overeating, no  I bite my nails.  Not a life threatening habit, but one I'd sure like to get rid of.  It's not like cigarettes though, you have to go out of your way to get them, your fingernails are there all the time, tempting you.  Particularly when you're in the middle of a good book.  Crocheting which keeps my fingers busy helps, but I can't crochet all the time.  Others have told me that going for manicures helped them kick the habit, but I'm really not the manicure type.  I hope some day to lick this problem, but I'm not hopeful, addictions are exactly that addictive.
at January 20, 2012