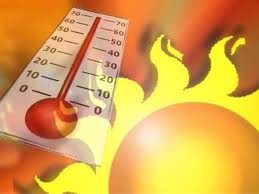 I was going to sew, I was going to exercise, I was going to make the world safe for ..... Well  you get the picture, but we went from having temperatures in the 70's and 80's (we even broke records for lows this week) to being over a 100, with a heat index of 118.
So we did a really short walk, sweat, sweat, melt, melt, went to the store for to get vittles  for the 4th of July and turned on the air conditioning way too early, but it was already 87 in the house and worse outside.  We try to get by with ceiling fans as much as we can, but there's being thrifty and there's being foolish.
So I've played the piano and I getting ready to go for a swim.  My cat, Miss Kitty, has been laying under the fan in the computer room all day.  She knows when to lay low and we'd be wise to emulate her.
at June 30, 2012