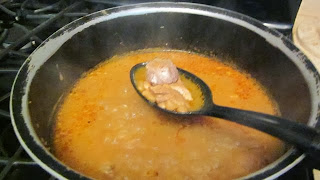 Thought I'd cook a pot of Great Northern Beans yesterday in my crock pot.  Knew from reading various recipes that it would take some where between 5-7 hours to cook them , so I started them early.  After 6 hours they were nowhere near done.  What I didn't know, but now I've learned, is that the older your dried beans are the longer it will take to cook them.  Neither one of us can remember when we bought the beans which means they may have moved here with us from California and that was 10 years ago.  Yikes, I think I'm going to invest in some new beans.
Anyway,  this morning I transfered the beans  to a big pot and I've been boiling the heck out of them and some of them are still hard.  But the pork ribs and tomato sauce I put in has made them delicious, if only they would finish softening up we would be eating the homemade version of bean and bacon soup, my favorite.
at November 04, 2013