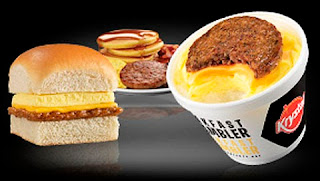 We took my car in for servicing yesterday, tried to walk some--it rained of course--so in lieu of sitting in the deep freeze that is our dealership's waiting room we went over to the local fast food place for breakfast.  Normally we don't do fast food, but we'd had no breakfast before venturing our and decided that you can't do much damage to scrambled eggs (lot we knew) so breakfast it was.
The place was fairly full, the drive thru was busy the whole time we were there and it took forever to get our food.  The coffee was so strong you could have removed paint with it so I watered it down with faux cream, a substance that has never known a cow and has more polymers than nylon, and instead of the scrambled egg breakfast I thought I was getting I got a cup of grits, minus the cheese I'd said to leave off, runny scrambled egg on top covered with a glutinous looking sausage patty, plus a biscuit.  I put the eggs on the biscuit, gave Mac the sausage and did my best to ignore the grits which appeared to have the consistency of Elmer's glue.  Mac had gotten a bigger breakfast and shared his pancakes with me.  Nothing was particularly good, but we were hungry, that is until a group of people spread over several tables began to play the "Do you know so and so game?"  Only this was the medical version, " Do you know so and so, he's got prostate cancer and bladder cancer?"  " I know him didn't his wife die earlier this year?"  "Yes, she had breast cancer."
Was this a bunch of old ladies?  No, a bunch of men!  Ick, go away, eating in this place is bad enough without General Hospital being played.
We finished quickly, got my car, did some grocery shopping and both had upset stomachs the rest of the day.  Don't know if it was the food or the conversation.
at July 03, 2013