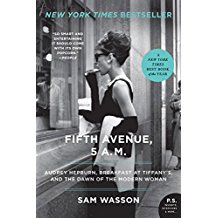 It was 95º yesterday and it feels worse today.  The pool was hot, not refreshing at all, even with a hat on I got a headache.
Had my B-12 shot this morning, after waiting an hour and a half--GRRRRRR.  Don't have any energy at all.
Thought I'd tell you about an interesting little book I read last week--

It gives the background on Truman Capote who wrote the book it was based on, Audrey Hapburn who starred in it, Blake Edwards who directed it, Henry Mancini and Johnny Mercer who wrote Moon River for it and the birth of the little black dress.
I read about this book on someone's blog, please forgive me for not giving credit, but I just can't remember who's it was.  Anyway it sounded like a good read and it was.
It was fascinating reading about how the book, which was considered unadaptable because of its subject matter--a call girl, a gay protagonist and an unhappy  ending--could ever be made into a movie that middle class America would go see.
I've only seen parts of the movie, now I want to see it all and to read Capote's original novella.
at July 05, 2017