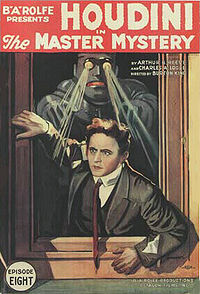 Today is Harry Houdini's birthday, he would have been 138 (had to edit that, still can't count) years old.  I've always been fascinated by magic and escape artists,  with  Houdini being a particular favorite of mine. I have  seen a number  of movies about him, from the rather cheesy Houdini (1953) starring Tony Curtis, to Fairy Tale: A True Story (which I liked very much)  to an even  better Death Defying Acts (2007) with Guy Pearce.
Two of the best movies I've ever seen about magic and magicians are:  The Illusionist with Edward Norton and Jessica Biel,  and The Prestige with Christian Bale and Hugh Jackman.
Houdini spent a good part of his time debunking spiritualists and mediums whom he considered frauds preying on a vulnerable public, but told his wife that when he died he'd send back ta message if he could, "Rosabelle believe", but the message never came.
at March 24, 2012