Jane has been much on my mind lately, not because it's her birthday (December 16), but perhaps because I've been reading some bad romantic novels that always leave me wanting to reread hers instead. I wish that more authors knew that less is more.  Graphic sex scenes do not a romance make.  Jane knew it well. 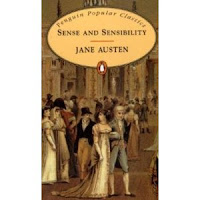 My favorite of her novels  are Sense and Sensibility and Pride and Prejudice, followed fairly closely by Northanger Abbey.  I'm not as fond of Emma, I don't care for the heroine or Persuasion, again it's the heroine.  Northanger has a rather silly heroine, but I found her likeable anyway, as opposed to the other two.  Of course I love Lizzy, and not just because of the movie.
And speaking of the movies, I've only seen the Jennifer Ehle/Colin Firth Pride and Prejudice, and I've seen it many times.  Though I like Keira Knightley as an actress, I refuse to see a remake of something that was perfect already.  One day I'll write about my favorite Pride and Prejudice film variation----Lost in Austen, but that's a blog in itself.
As to Sense and Sensiblity I own two versions of it, the Emma Thompson/Kate Winslet 1995 version and the Masterpiece Theatre Charity Wakefield/Hattie Morahan version.  I like the first because of Alan Rickman as Col. Brandon, whereas I thought Greg Wise was all wrong for the part of Willoughby.  Emma Thompson and Kate Winslet were too old for their parts too, but they're so good I forgive them.  The actors in the Masterpiece Theater version were much closer to the right ages, and Dominic Cooper made a much better Willoughby, but I missed Alan Rickman.  It was a little racier than the Emma Thompson version, but in other ways more faithful to the novel.  I saw the Gwyneth Palthrow 1996 Emma, but actually liked the Alicia Silverstone 1995 Clueless, an updated version, much better.  I've seen a version of Persuasion but remember very little about it.

I like the first  two movies so much that I own the CDs of the music and sheet music for all 4 of the movies.  I use the music from Sense and Sensibility to exercise to, I simply turn down the voice on my exercise tape and turn up the music instead, it doesn't fit what I'm doing, but I enjoy it anyway.  I do my warm-ups to a rather operatic solo.

The piano sheet music is fairly simple, some day I'll have to order more complicated versions, but right now they're perfect for me.  I play the music frequently and never tire of it.
So that's a bit about my Jane Austen obsession.
at March 06, 2012