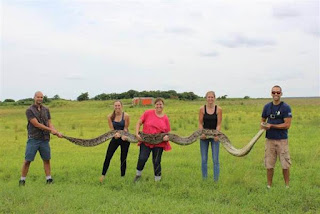 I don't want you to think I'm just posting random photos of the wildlife found in Florida.  This 18 foot 3 inch Burmese Python was found and killed in the Everglades National Park last week.  To be specific it was found near the tramway in Shark Valley.  What does that mean to me?  Well, we've biked and walked that tramway and in fact have gone off on side trails from it.  The fact that something this big and this awful was lurking there scares the B'Jesus out of me.  We were there in February walking those trails.
Park officials estimate nearly 100,000 of these critters are now in Florida and it's a disaster for the wildlife.  They eat and kill everything, including alligators.
People need to stop releasing their unwanted animals into the wild.


On a lighter note, the new header is one of my favorite paintings, Mac painted it years ago and I never take it down or trade it for another painting.
at August 05, 2015