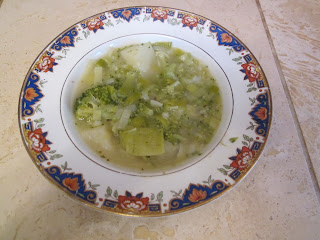 To all of you still stuck in the snow and cold I feel bad, it's around 60º here today and just beautiful.  This seems to be my year of making soups, prior to the Bean and Bacon I made last fall I'd never made soup before.  Not quite sure why, maybe I thought it was too much work.  But after studying the sodium levels in canned soup I knew it was time to start making my own.
Today's soup is Leek, Potato and Broccoli and it tastes delicious.  I'll probably throw a little ham in it just to satisfy my carnivore urges.
I finished my second volume of William Manchester's biography of Winston Churchill and it was as good as the first volume showing Winston in his days of being an outcast in the '30s and ends when he becomes Prime Minister in 1940.  I've studied very little about this period of time and often wondered why countries didn't stand up to Hitler before he'd taken over most of Europe.  It's hard, in this day and age, to understand the desire for peace being so strong that they'd literally let millions be enslaved to avoid war.
The book read almost like a mystery, who'll do what next, who'll stand up, who'll bury their head in the sand.  There were some real villains in this book and I'm not talking about Hitler.  I think I have a much better understanding of the root causes of World War II, not just the terms of the Versailles Treaty as I always thought.
Well it's time to work on my friend the afghan again.
at January 25, 2016