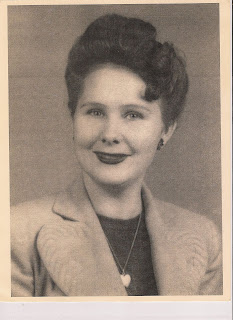 Tomorrow is Mother's Day, a day when I think about my Mother and my Mother-in-law, both of whom I miss very much.  My Mother has been gone for 18 years and my Mother-in-law for 22.  They were 2 very different ladies.  My Mother Lorraine Kennedy Strader always had an air of sadness about her, whereas my Mother-in-law Pazquela Hernandez Gutierrez was the most cheerful person I've ever known, always with a smile and looking on the bright side of things.
My Mother was born in Oklahoma in 1922 and grew up in abject poverty, living at one time in a cave and the family ate mud for lack of food.  She dropped out of school at 13 because she had no shoes to wear and moved in with an aunt and uncle and babysat their kids.  She also picked cotton as a teenager and said it was the hardest job she ever had.  She married young hoping for a better life, but the marriage ended in divorce and she married my Father in 1944.  He was the love of her life and they were married 36 years.  She never talked about her childhood much, but her brother, my uncle Bill was an author and his last book (left unpublished at the time of his death) was the story of their childhood, my Mother gave me a copy to read and it was bleak to say the least.  I asked her if it true and she said that for the most part it was, it was so sad.
When I think about her I realize that I didn't know her very well.  I know she loved to read and our house was always full of books, magazines and newspapers, that she loved African Violets and Roses, but I don't know here favorite color or what would make her smile.
I married at 18 and only saw her infrequently after that because my husband was in the Army and we never lived near home, and she only visited us twice in all the years.  We talked each week on the phone and I would fly to see her whenever we could afford it but that does not make for a very close relationship.    I wish now that we had talked more and shared more, that I'd asked her more questions  so that I could have known her better. 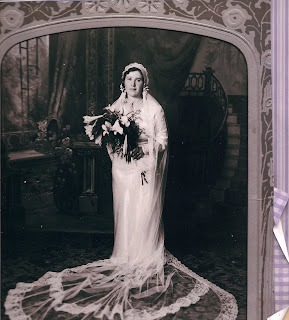 My Mother-in-law Patty was born in Fresno, California in 1913 after her parents had emigrated from Spain.  Her family worked the crops picking whatever was in season, camping wherever they worked.  She always said that was a happy time with much laughter and singing around a campfire.  She too dropped out of school at 13 in order to work more, she said it was the saddest time for her, that she had  loved school and didn't want to quit.  She also married young, at 18, and was married for more than 50 years.  She loved crocheting and making things, quilts, stuffed monkeys, hats, hotpads, her hands were never still.
She taught me to crochet and to cook,  if truth be told.
Wherever we lived,  Germany, Texas, Colorado, Georgia, she came to see us, and with her I spent hours talking and learning about her life.  She was such a good person and I was incredibly lucky to have had her as a Mother-in-law.
So these are the two ladies I honor on Mother's Day.
at May 07, 2011