Got Up On the Wrong Side Of The Bed 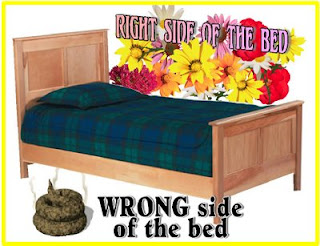 Indeed I did yesterday, got up earlier than I wanted to because I had to go and have my B-12 shot in addition to going to try on my new contact lens for the Optometrist.  So I was grumpy, didn't want to do either of those things.  I was going to the Minute Clinic for the shot because the waiting at my doctors office to get it done had become an additional pain.  So we made an appointment online and headed into town.  One person already in with the nurse, but it wasn't long before I went in and got it done.  I've seen this nurse a number of times and she has a soft touch.
Then it was off to the Optometrist about a half hour early, but I got right in, put the contact in, the assistant commented that I'd done that quickly---HELLO--I've only done this about 20l000 times.  Waited to see the Optometrist, she was satisfied so I ordered the contacts and they agreed to mail them out to me, for a nominal charge (I didn't even ask what it was) and I was through!
Mac picked me up, having bought me the world's biggest dark chocolate bar to cheer me up.
I'd finally quit snarling and we went out to breakfast which is always a nice treat.
Then this morning, I stripped the bed, threw in a bunch of towels, washrags and socks and started the washer.  Should have known better, too big a load.  It took forever because the machine keep trying to spin dry the huge load.  It finally gave up and we had to wring the load out by hand.  Mac got the washer to reset, I hung out the really wet clothes and I'm hoping they'll dry.
So hot after that I had to jump back in the pool.
By the way, I looked up the origin of getting out of the bed on the wrong side and found out it dates back to Roman times.  They didn't want to get out on the left side or step first with the left foot, felt they'd have bad luck.