It's Rolled Around to Saturday Again

Where does the time go!  So hot here, 97º yesterday and Lord only knows what it is today.  My thermometer reads Too D••n Hot.º
Cleaned bathrooms and made potato salad this morning, whoops, reverse that, I made potato salad and then cleaned the 3 downstairs bathrooms, the upstairs bathrooms are on their own until it cools down.  We don't use them and they're probably just dusty.
Visit with a good friend yesterday, our favorite Redneck, he's in a bit of dilemma .  He's selling a big piece of property for a LOT of money, but the deal will take months to go through because of needing county and state permission for what the buyer's want to do with the land.  In the meantime 2 of his renters have moved out of some other pieces of property, it took all his ready cash to restore one of the houses and he's in a cash bind.  Not asking for money, he's not that kind of person, just advice.  So we gave advice and as always he did something for us,  he cut up the tree that fell down last week and left us his power washer so Mac can clean the house, providing the temperature drops below "the sun is going to kill you line".
Meals have been rather light around here, tuna and deviled egg sandwiches yesterday.  So today it's barbecued pork ribs.  Too hot to turn the stove on, that's why the potato salad was made first thing this morning. 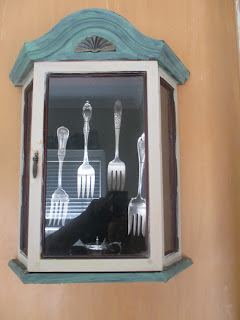 Have to show you something Mac gave me.  A while back I bought a lot of Silverplate serving forks on Ebay.  Had no idea what I was going to do with them, but they were so pretty and so reasonable that I had to have them.  Since then they have languished in a kitchen drawer getting tarnished.  Well we celebrate the 17th of each month (because we met on the 17th of March when we were just teenagers) and give each other gifts we wouldn't buy for ourselves.  He cleaned my forks, painted a cabinet and gave me such a pretty gift.  There are 2 other forks, but there was only room for 4 in the cabinet.  He sprayed them so they won't tarnish again.  Just love it.  Please excuse my reflection, it was the only way to take the picture without taking the cabinet off the wall.

Started a rather interesting book The Year of Reading Dangerously: How Fifty Great Books (and Two Not-So-Great Ones) Saved My Life  .  His plan is to read at least 10 "great" books that he's never read, though he has frequently claimed he had.  He starts with Middlemarch and almost gave us on the whole project until his wife advised him to try just reading 50 pages a day.  That worked and he eventually became totally engrossed in the story, ended up loving it.  Middlemarch has been sitting on my Kindle for more than a year, maybe I'll try this method too.


I also finished one I'm glad I only paid $1.95 for.  It was:  When I'm Gone  by Emily Bleeker.  I finished it last night, couldn't sleep and I was hoping it would put me to sleep, it wasn't even good enough for that.

Time to go and sweat my way through the Classics (on the piano) and then work my body through music on my Mp3.

Hope you're having a cooler weekend than I am.