A Family Story With a Sad End 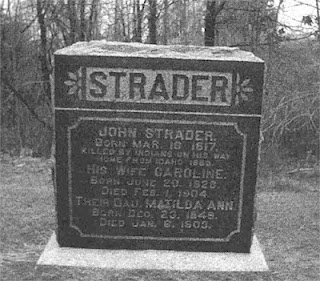 While working on my family history at  Ancestry.com   I ran across a relative who seems to have met  a rather desperate end.
My  Great, Great Uncle John Strader (he was my Great, Great Grandfather Martin Strader's brother) who was born in March 16, 1817 in Ross County Ohio and was the 6th of 15 children, oh they did have big families back then.  In 1846 his parents sold the rest of their farm land in Ohio  and settled in McDonough county in the Illinois area.  There John met Caroline Tracey and on March 8, 1849 they were married.
At first, as shown by the 1850 census,  they were still living with John's family on the farm.  Subsequently they got their own farm in Chalmers county Illinois where they had 7 children (Matilda Ann, Elizabeth Catherine, Margaret Jane, John McCoy, Ida Lovina, Mary Elda, and William Simeon).
Farming is a hard way of life and raising 7 children even harder, so perhaps it isn't surprising that  when John heard of a gold rush in Idaho that he joined a group of other men and headed west to seek his fortune and never returned.
Word finally reached the family that John had been killed by Indians in Missouri as he had been heading home.  There is a stone in the southeast section of the Gibson Cemetery in Illinios with this inscription on it: Killed By Indians On His Way Home  From Idaho 1860.  The stone is all they have, no body was ever recovered.
Caroline lived on to raise their 7 children alone.