The Drought and My Pocketbook 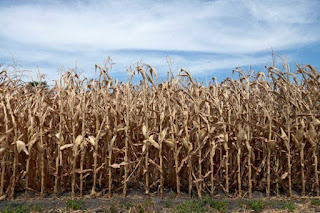 The drought is all through the USA, particularly in the midwest where all the corn, soybean  and wheat grows.  It has been devastating to the farmers there, even with crop insurance.  We went grocery shopping last week and I realized that the drought is going to be devastating to consumers too.  There's only the 2 of us, but already I see an increase in the prices we're paying, I'd hate to be feeding a houseful of people.
Worse hit seems to be the corn crops and the soybean crops, so I decided to take a look and see which of my pantry items contain these two ingredients.
We're lucky, we don't eat a  lot of canned food, we try to grow a bit of our own veggies or we buy fresh local produce.  But in my pantry I found that :

My Hellman's Mayonaise  has soybean oil.
And of course my bread  flour is made from wheat.

Then there's meat and poultry.  Cattle shouldn't be feed corn, but they  are, to fatten them quicker and pigs and chickens are fed diets full of corn.  So the price of meat is going to go up.  Initially meat prices will decline as ranchers sell off their cattle so they don't have to buy higher priced feed for them, but then there will be fewer cattle coming to market and that will drive the price up.  People would say we should give up meat, but I'm a committed omnivore and as much as I love my veggies, and I do, they make up the majority of our meals, I want to eat meat too.  So I'll have to be more selective about what we eat, we already eat 3 to 4 chicken meals for every beef or pork one we have.  Fish is higher than all of the above, and though Mac loves fish I'm a reluctant fish eater.  We do generally have tuna fish on Fridays, but that's about it.

But the really bad news of course is that 15% of our gasoline is ethanol which is made from corn so gas will be going up, and it's already up because of the fire at the Chevron refinery in Richmond, California.  So it's going to cost more to transport everything  and more to go to the store to buy it.  More reason to shop locally and buy local produce.
at August 15, 2012