...And Then The Snake Lady Slithered In 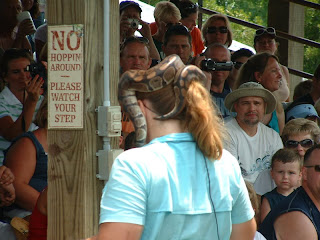 Her name is actually Beverly, I think, but she shall forever be knownto us  as the Snake Lady  because of a tale she once told us of walking out her backdoor and having a snake drop on her head.  Well, she slithered into our table last night as we sat taking a breather between dances and began a long and windy (isn't that a song?) tale about a cabin she and her husband had rented in Tennessee, just 15 minutes outside of Nashville.  We were given more details than we ever wanted about the place, then about her 2 near- death experiences of the last week, one involving a truck that ran her off the road and one involving a water mocassin (had to be a snake involved after all she is the Snake Lady).  Finally the band played a song we liked and we ran, and I do mean ran, to the dance floor.  When the song was over she was gone, we thought.  About a half hour later she was back, with her husband whom we had never met before, he seemed rational (not drunk) as she was not.  She began a rambling discourse about how they were private people, as we were private people, and because of that she insisted that we go to Tennessee with them and rent a cabin.  To say we were gobsmacked wouldn't even begin to describe how we felt.  She went on and on about she "loved" the people at Tommy's (that's where we were last night) but she didn't want to go anywhere with them or take them anywhere, but she wanted to take us!
Now we don't really know the Snake Lady, have had only a couple of rambling conversations with her and hadn't seen her in a couple of years so why she had decided that she needed to carry us off to a cabin in Tennessee I do not know.    I know that alcohol can loosen the tongue, give us illusions and delusions,  but Lordy, Lordy what was she thinking!
We ran to the dance floor again, the band might have been playing a funeral dirge for all we knew, we just needed to get away from our table.  When the song was over  her husband had taken her away.  We reminded ourselves that sometimes we need to get rid of the extra chairs at our table and tonight was a perfect example of why.
Mac checked to make sure they were really gone and we headed off to the Huddle House to have breakfast before going home, but looking in the window before we entered Mac spotted her (hiss) in there and we turned around to leave, with our favorite waitress running behind us wanting to know why we were leaving.  We explained the situation  and headed off, ended up at Denny's and had a great breakfast, absolutely snakefree.
at October 11, 2009