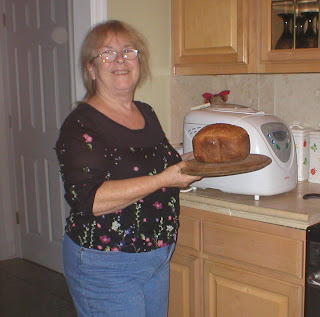 I made bread yesterday, edible bread, I can't believe it!  My daughter April had given me a bread machine for my birthday and I'd been waiting for a cool day to try it out..  I'd put it on my Amazon Wish List and like the good daughter she is, she got it for me.  I've had the urge to make my own bread for a while.  After reading the list of ingredients on a package of bread  I'd thought  that I could probably do a healthier version.
So feeling very Betty Crockerish yesterday, and it not being 900 degrees in the house, I decided to attempt a loaf of sour dough bread.  For my first venture into bread making I used a package of sour dough bread mix instead of mixing all of my own ingredients.  That may be a little bit cheating but I didn't care, I wanted my first loaf to be successful.
I poured in the water, added the flour mix, made a little hole in the flour, put in the dry yeast, set the machine for basic white bread, medium brown crust and 3 hours, turned it on and let her rip!  Three hours later I had a crusty loaf of sour dough bread.  It wasn't as sour as I would have liked, but it was tasty, we had it for dinner yesterday and breakfast today, it toasted well.
So I'm really happy!  I make pasta and bread and Mac makes beer, now if the cat could find something to specialize in we'd be set. 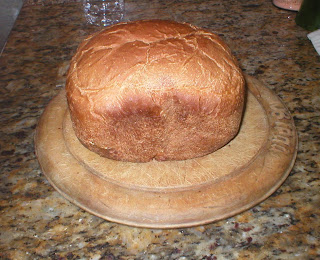