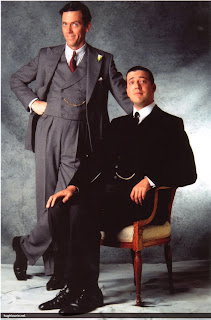 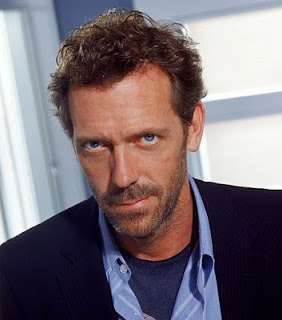 I finally got around to watching the season premiere of House, and I'm once again blown away by what a good actor Hugh Laurie is.  When we first saw Hugh Laurie it was in the British series "Jeeves and Wooster", with Hugh playing the rather silly young man Bertie Wooster, a bit of a waster as his Aunt Agatha would say.  We loved the series and own the entire run of it.  He was so believable as an idle Englishman living life without a clue.  Then several years ago House came along, sweet lovable Bertie Wooster was gone and in his place was  the American doctor Greg House.  Mean, nasty, talented, almost friendless.  What a transformation.  We really enjoyer the show because though it was serious it still had a sense of humor.
Then last year House became so mean spirited that it was painful to watch and we'd decided to give it a miss this year.  But in a fit of boredom I went to Hulu (where you can watch tv shows 8 days after they've been on) and watched the first episode.  It was serious, House was in a mental institute where he was kicking his Vicodin addiction and learning to be human again.  And he did, I think it will be a much better season.
at October 03, 2009