Just Some Random Thoughts on a Saturday 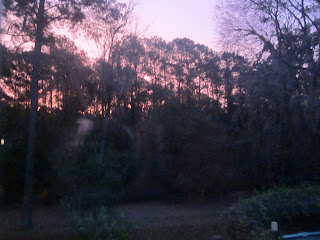 Yesterday would have been my Mother's 95th birthday, but she died in 1993, much too soon.  So many things I never thought to tell her or to ask her.  She died from smoking, I quit smoking way back in the 80's, but my 2 sisters still smoke and I wish they could quit.
I'm making short ribs in the slow cooker and they smell so good. It's a new recipe courtesy of Pinterest.   I'll serve them with mashed potatoes.
Had to run to the store today, a friend is coming over for lunch tomorrow and he always asks me to fix my notorious 7- layer dip.  It's so good and so fattening so I don't make it often.  But I needed nearly everything that goes in it so had to hit the store.
I'm still working on my Granny Square blanket, will probably spend the rest of the year on it if I want it King-size.
I'm including a picture taken at sunrise last week, we don't often see them--sunrises that is-- as we get to sleep late now that we're retired.  But we had to get up early the day we drove to Charleston so Mac took s photo.
at February 27, 2016