Saturday in the Swamp

The storms came, as predicted, giving us more than an inch of rain again.  That's more than 2 inches this week. The tomatoes have fainted, they say they just can't deal with it.  The temperature is lower, but the humidity is 95%, so it doesn't matter how hot it is, it's pretty miserable.  I worked in the garden because it's overcast and I wouldn't burn to a crisp and managed to weed about 1/2 of one bed, very satisfying pulling those suckers out by their roots.  No weed killer for me, I'm the executioner.

On another topic, I have some chicken thighs defrosting in the refrigerator and they're huge.  They claim the chicken is all natural, I took a picture of the label.  But if they're not feeding those chickens
steroids or growth hormones then by golly someone is raising mutant chickens.  These thighs are bigger than mine. 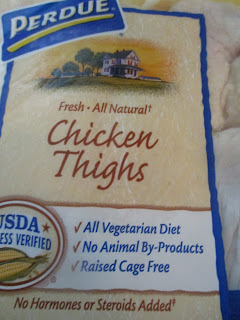 Time to go tackle some piano music that's actually been giving me nightmares.  So pretty and so hard.
Have a good weekend.
at June 18, 2016