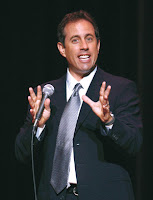 We went to see Jerry Seinfeld last night and really enjoyed his show.  Mac pointed out that our enjoyment came because he, Seinfeld, was enjoying himself.  He was having fun so we were having fun.  His standup routine was very similar to the old Seinfeld show, in other wordsm it was about nothing.  There was no theme, just his view on life, our lives and his.
We learned he's 55, has been married 10 years and has 3 kids, 3, 6, and 8.  His 89 year old mother lives in Florida, in Boca Vista no doubt, and still drives.  He had a cornea lens windshield put in for her, ha, ha!
We learned how close a relationship there is between things that suck and those that are great.  If you drop your ice cream cone that suck, and your say, "Now isn't that great!"
We also learned that a good number of Savannah residents either can't read or they're just plain rude because it was clearly stated that there was to be no picture taking or recording.  Yet that's what was going on, lots of picture taking, security spoke to a lady in the row in front of us several times yet she kept taking pictures.  I kept hoping they'd take her phone away.  Maybe it's just that some people are so stupid that they think that if they do it with a phone it's not taking a picture like with a camera.
Anyway, great show!
at September 18, 2009