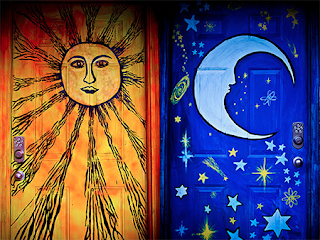 No contest, I'm a night person.  I've always known it, dragging myself out of bed to go to school as a child, going to work long before I even wanted to be up as an adult, dealing with  a morning person husband (thank God I've converted him),  getting up with a night person daughter when she had to be up in the morning (I'd hide out in the kitchen while she ate breakfast), yes I'm a night person.
When I was a child my Mom use to say she actually felt guilty getting me up for school in the morning because she could see how hard it was for me to wake up.
As an adult when I became a teacher I use to wish there was such a thing as night Kindergarten it was so hard to be bright and chipper in the morning.
And it has no connection to when I went to bed, didn't matter that I'd had 8 hours or more of sleep, I still had trouble getting up in the morning.
As an adult I discovered that the later I stayed up the better I felt and the more awake I became.
Retirement has been wonderful, except when we actually have to go somewhere early in the morning we don't use a clock.  Sleeping till 9 am or later is the norm, staying up pass midnight is also the norm.  I love it!
So what brings on this semi-rant?  I had to be at my retina specialist this morning at 9 am and his office is on the far side of Savannah which meant we had to be up by 7am and out the door by 8:15.  The drive was awful, my eyes were aching, allergies have them so swollen they look like little piggy eyes and I had to do a peripheral vision test.  It didn't go well.  I'm sure that if I could have done the same test at 9 pm the results would have been better.
I don't like mornings.
at September 23, 2013