My Favorite Time of Year 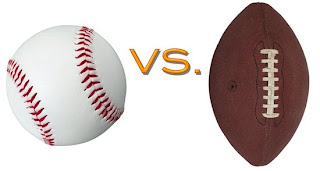 Football and baseball, who could ask for anything more.  Well I could ask for my football team (Raiders) to actually act like a professional football team, but that's a minor quibble.  Right now I'm watching the Atlanta Falcons play the New Orleans Saints, two teams I enjoy and during the commercial breaks I'm watching the Atlanta Braves baseball team play the Philadelphia Phillies.
The next game is even better, the Green Bay Packers vs the San Francisco Forty-Niners and we'll round the evening off with the Washington Redskins vs the Philadelphia Eagles.  Whoops, make that the New York Giants at the Dallas Cowboys, even better.
A great weekend.
at September 08, 2013