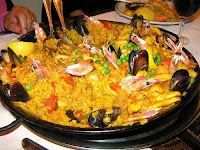 My friend Patty posted a recipe for Chicken Fajita Dip and asked others to leave a recipe on her Blog (www. welcometopattyville. blogspot.com). Her daughter Shea left one for Stir-Fry Chicken.
I told her I'd post a recipe, but I'd do it on my Blog.
So I decided to post my recipe for Paella, a Spanish dish. I need to add that my husband Mac is Spanish and Spanish food is very different from Mexican. The Spanish don't eat Fajitas, Tacos, Enchiladas etc. Spanish food is spicy, but not hot, very few peppers are used. They eat lots of grilled meats, stews and tortillas,which in Spanish cooking is an omelet, while in Mexican it's flat bread made of flour or corn.

So here's my recipe for Paella:

2 medium garlic cloves crushed
1 medium onion chopped
4 chicken thighs
2 cups water
14 1/2 oz canned tomatoes, whole, peeled and chopped (I sometimes throw in a can of tomato sauce too)
5 1/2 oz uncooked rice
12 shrimp (I use frozen)
pinch of Saffron (Spanish spice, very expensive, but you can substitute Turmeric)
1 chorizo chopped up This is a Spanish sausage, don't use the Mexican kind it falls apart.
2/3 cup frozen green peas.
Green peppers and red peppers can be chopped and used if you like (Mac's not crazy about Bell Peppers so I go easy on them).

1. Spray a large skillet with cooking spray (I use olive oil flavored). Brown the garlic, onions and chicken. I cook it till the chicken stops bleeding.

The picture at the top is of a real Paella and it has mussels, squid and other stuff. A Paella is actually meant to have anything that you have laying around your kitchen, it's a real catchall. I've had it with pieces of rabbit, fish and other sausages. So throw in what you want.

This is one of Mac's favorite meals, I made it for him on his birthday and when he heard I was writing about it he asked if I'd fix one this week and I said yes, and I'll throw in anything in the fridge that looks good. The only things I always put in are the rice, green peas, saffron and chicken.
at July 26, 2009