Romp in the Swamp or Love Hurts

Yesterday while I was fixing lunch Mac called me to look at something in the lagoon out back. At first we thought it was a pair of otters playing. A couple of weeks ago we had seen a pair running across the road near here and we thought this might be a pair of them.
But they were really big, rolling around in the water, splashing, totally unconcerned that people might be around. Then we thought it might be a pair of beavers, we have them in the lagoon from time to time too. Meanwhile Mac is running all around the house looking for our binoculars, we had taken them to Atlanta with us and we couldn't find the backpack we'd had them in. Finally he found an old pair out in the garage, and oh my God it was a pair of Snapping Turtles about 2 foot long each (head to tail) and a foot wide. We "think" they were mating or fighting or fighting while they were mating. It went on forever. Biting, rolling, water churning. Our little redneck sliders (our usual turtles) all hid out. There are 3 types of snapping turtles, alligator snappers, common snappers and Florida snappers.
The picture up above is from the Internet, below are the ones Mac took. I had no idea we had something that big in the lagoon! They say they can grow up to 2 feet and weigh more than 45 pounds and I'm betting these were nearly that big. They are very aggressive for turtles and I'd hate to meet one in the water.
I don't swim, or dip my toes in for that matter, in the lagoon and now I have a couple of more reasons not to. 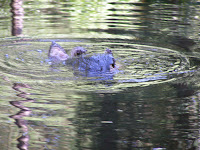 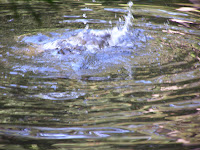 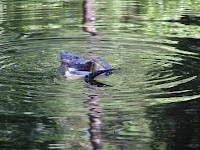