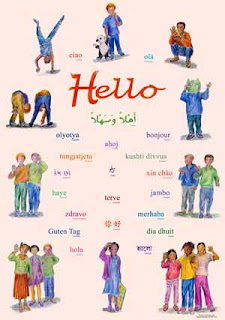 It's sad but true.  Other than people who grew up in a home where a foreign language was spoken most Americans only speak English, and not even that very well.
I've lost a lot of my Spanish since I retired from teaching and don't speak it every day, but I'll never forget it, and keep several Spanish textbooks on my Kindle so I can practice a bit from time to time.

I speak a bit of German too, what I call kitchen German, I can shop, order food and ask directions.  We lived in Germany and I took classes in it, but we lived on an American base and didn't have to use it daily.  If you don't use it you'll definitely lose it.

Mac grew up in a house where the parents spoke Spanish to each other, but not to their kids (not after the first one because the school complained when he started school and he didn't speak English) and though he understands it, has a great accent, can really trill those "r's", he doen't really speak it.  In college he took German and when we lived in Turkey he really got quite good at Turkish,  a language I could never get a handle on.

I think learning a foreign language is important, our daughter took German classes when we lived in Germany, French all the way through high school, Spanish in college and Japanese classes for years.  She says that she regrets that she didn't do an undergraduate degree in linguistics.

On April 16 Dawn Treader  at Beyond the Lone Islands wrote about what languages she could speak and read in, I was amazed.  It made me feel very uneducated.