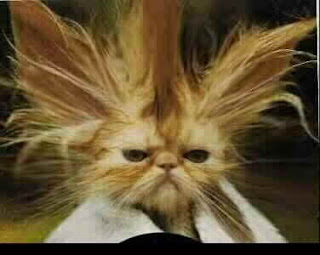 My piano tuner came today, it takes about an hour to get it to sound like I haven't been hammering on it for a year.  As we sat in the other room Mac commented that it sounded, literally, like a rather boring job.  I said that at $100 an hour it was pretty lucrative though.
Miss Kitty hates to hear the piano being tuned.  Though she enjoys my playing and has been known to pick out a few notes herself she becomes quite "bat-earred" when it's tuned.  She'd probably pay him not to do it.
at April 26, 2013