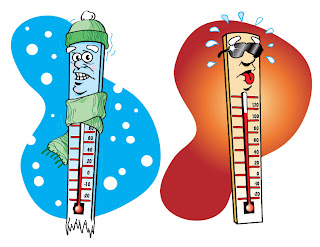 It was 87˚ here yesterday, working in the garden I sweated enough to fill a small goldfish pond.  Doing my aerobics was even worse.  Then the rains came, and that's a good thing because it washes some to the pollen out of the air, pollen that has been running around 5,500 parts per cubic meter.
So the rains came, the air cooled and today the high is supposed to be 69˚, but it's going to be a real struggle to reach that because it nearly noon and it's only 54˚ and it's not acting like it plans on warming up much more.  Now I know that 54˚ isn't really cold, but compared to 87˚ it is and my bones and joints would be the first ones to tell you so.
But I'll be good and I won't grumble because then it might turn 90˚.
at April 20, 2013